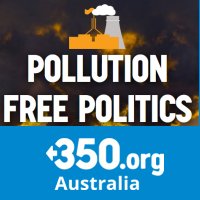 $3,700,000 has been donated by the fossil fuel industry to Australia’s major political parties since the last Federal Election. The sector has done pretty well from their gifts says 350.org.au.

350.org Australia has launched a campaign to apply pressure on political parties to end fossil fuel donations and subsidies.

“If we are serious about climate solutions, we must end the cosy relationship between our politicians and the big polluters,” said Blair Palese, CEO of 350.org Australia.

“For every dollar donated to the major parties over the past 3 years, the fossil fuel industry will receive over $2000 in Government hand-outs from our politicians this year.”

Calling the relationship “polluted”, 350.org says the Federal government will provide $7.7 billion in subsidies to the fossil fuel industry in the next financial year.

MPs were called upon by 350.org Australia to sign a pledge that simply states the following:

” I personally support, and call on all politicians and parties to support:

A handful of MP’s and former MPs have signed on to the pledge so far or are members of parties that align with it. It will probably be no surprise that most are either Independents or Greens, but 2 Labor MPs are also among them.

“I am a strong supporter of action on climate change and I am against subsidies for the fossil fuel industry,” said ALP Member for Fremantle, Melissa Parke. ” I would like to see greater restrictions on the influence of that industry.”

27 have refused to sign the pledge – the majority from the Coalition; with most of those also flagged as “Climate Blockers”. The remainder are yet to respond.

350.org will be mobilising its supporters and encouraging Australians to put pressure on pollies to say no to donations and subsidies in the lead up to the Federal election.

MPs may also find themselves inundated with communications from solar supporters in the coming months; with issues relating to solar + storage expected to wield some clout in Federal Election 2016.