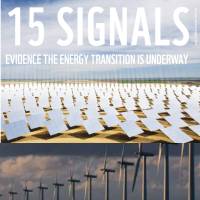 A new report highlights 15 signals of an energy transition occurring across the world, indicating a sustainable and equitable global energy system has irrevocably begun.

The signs, detailed in a report by WWF-France and WWF-China, provide encouragement that the transition can be found just about everywhere; from the growth in renewable energy to companies committing to slash their carbon footprints.

Some of the signals include:

“These changes mark a significant shift in our global energy use, but we can’t stop here,” says WWF.

“It looks as though 2016 will go down in the record books as the hottest year ever recorded. It’s a reminder that we have precious little time left to act to keep global temperatures below 2°C.”

WWF is urging the pace of transition to be accelerated through actions including removing fossil fuel subsidies, increasing support for renewables and putting a price on carbon.

15 Signals : Evidence The Energy Transition Is Underway can be viewed in full here (PDF).