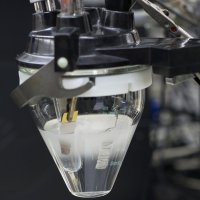 U.S. researchers have developed a new, highly efficient solar energy system for splitting water into hydrogen and oxygen, a breakthrough they say could lead to a major increase in the supply of hydrogen fuel.

In work published in the online journal Nature Materials, scientists from the Missouri University of Science and Technology describe their unique electrodeposition method for ramping up the performance of silicon wafers used to extract hydrogen from water for storage as solar fuel.

“The work helps to solve the problem that solar energy is intermittent,” says Dr. Jay A. Switzer, the Donald L. Castleman/Foundation for Chemical Research Professor of Discovery at Missouri S&T. “Obviously, we cannot have the sun produce energy on one spot the entire day, but our process converts the energy into a form that is more easily stored.”

The scientists used electrochemical deposition to dot the back side of each silicon wafer with tiny nanoclusters of cobalt catalyst electrodes. When the wafer is submerged in water, the front side absorbs solar energy, producing the voltage required to drive the water-splitting process.

Oxygen atoms are drawn to and coalesce around the cobalt-coated electrodes, while hydrogen “evolves” at a counter-electrode made from platinum.

Unlike common solar power based water-splitting techniques, which cover the silicon surface entirely in a uniform layer of catalyst electrodes, the Missouri method of simply depositing “islands” of cobalt catalyst produced higher voltages at a lower cost.

“Initially, we had set out to produce a uniform layer of metal that both catalysed and protected the silicon, but found that this method actually produces a higher voltage and did not need an additional step that typically has to be applied to the silicon,” says Switzer. “These nano-islands of cobalt produce a much more efficient cell.”

The technology has the potential applications for storing energy from solar power systems, increasing production of large-scale hydrogen harvesting, and hydrogen-powered travel, according to Switzer.

“If we use this process in hydrogen-fueled vehicles, the hydrogen would be used as fuel and the only thing dripping out of the tailpipe of the car would be water,” he said.