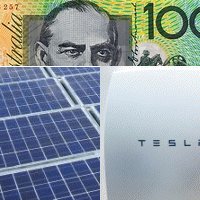 Will installing a home battery system affect your solar feed in tariff? The question is one regularly put to the Clean Energy Council. In response, the nice folks at the CEC have put together a brief guide regarding the current situation re the solar battery feed-in tariff interaction.

Please see our other articles about the solar battery feed-in tariff situation to see what developments have occurred since this 2015 article.

In summary, here’s how things look in each state.

Feed in tariffs are not payable in the ACT if a system includes a storage device connected to any other source of electricity. One exception is in the case of a compliant renewable energy generator under the Act.

In NSW, it depends on the setup of the solar + storage system. For example, exports under the Solar Bonus Scheme are payable only if the PV system generated the electricity. In this scenario you’re not able to charge a battery system with cheap off-peak electricity and then export it; earning a higher rate.

The NT’s 1:1 solar feed in tariff is not affected by the installation of an energy storage system.

The CEC states the situation in QLD is unclear and may be clarified through a review.

Installing a home energy storage system in SA will result in ineligibility for continuing feed in tariff payments.

Likewise, the coast is clear in VIC. A battery system will not result in cessation of FiT payments.

Owners of solar power systems in WA can install non-exporting batteries behind the inverter without needing the involvement of the retailer. Consequently, this will not affect premium feed-in tariff eligibility.

WA’s Energy Minister announced yesterday that battery storage and electric vehicle systems will be permitted to export support surplus electricity to the mains grid from December 1 this year.

You can grab a copy of the Clean Energy Council’s information sheet storage and feed in tariffs here (PDF). It’s current as at September 17. Bear in mind the rules are in a state of flux in some states and as noted above, there has already been a change in Western Australia.

For some owners of solar panels looking to further minimise reliance on mains power or to ditch the grid altogether, the topic of the solar battery feed-in tariff interaction may soon become a non-issue. Notably, the numbers in this latter group are growing