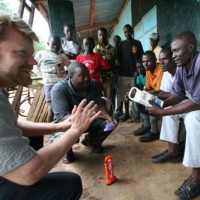 In developed nations, we tend to take illumination somewhat for granted. But think for a moment of what life would be like without clean, safe lighting.

Security would be compromised, productivity curtailed, air would be more polluted, incidences of fire would increase and respiratory diseases would skyrocket if we were all reliant on fossil fuel based lighting such as kerosene lamps. Our energy bills would also be far higher than what we currently experience.

This is still the normal situation for more than a billion people around the world. We mentioned earlier this year that rural families throughout Africa reportedly spend around 10% of their household income to provide just 4 hours of poor-quality and often hazardous light at night using kerosene lamps, torches or candles.

We’ve written quite a few stories over the years on how solar lighting is changing this – and it’s happening quite quickly. But as the clean lighting revolution really kicks in, what will the impact be on those who sell fuels and associated lighting equipment?

And this is still really just the beginning.

According to Mr. Mills and based on a survey of major solar-LED lighting companies, 38 jobs are created for each 10,000 people living off-grid for whom stand-alone solar-LED lights are suitable.

He estimates 2 million new jobs could be created to serve the “poorest of the poor” – the 112 million households that do not have electricity access, are unlikely to be connected to major or micro grids, or unable to afford more extensive solar power systems.

“People like to talk about making jobs with solar energy, but it’s rare that the flip side of the question is asked – how many people will lose jobs who are selling the fuels that solar will replace?” said Mr Mills. “We set out to quantify the net job creation. The good news is, we found that we will see many more jobs created than we lose.”

These jobs would also be better quality than those associated with the fuel-base lighting sector.

“These new solar jobs will be much better jobs—they’re legal, healthy, and more stable and regular,” he says.

Evan Mills’ paper on his research, “Job creation and energy savings through a transition to modern off-grid lighting.” was recently published in the journal Energy For Sustainable Development.