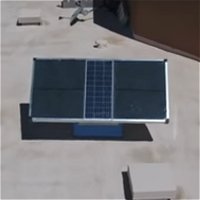 Source is a “drinking water solar panel” that produces clean, fresh water and delivers it directly to a tap.

Arizona company Zero Mass Water is rolling out technology that extracts water from the air and condenses it, with all equipment powered by the sun. The project is being supported by the Clinton Foundation.

According to the World Health Organization, 3.4 million people die each year from waterborne illnesses. Obtaining drinking water can also be a labour-intensive exercise, with UNESCO estimating 40 billion hours per year are spent in Africa in just in walking to a water source. Imagine if that time could be redirected to other tasks.

The air around us holds a lot of water – Zero Mass Labs estimates that in the region nearest the Earth’s surface alone, there’s enough water for all the world’s population to survive for 15,000 years.

Each Source unit can generate enough water for the daily needs for a family of four. 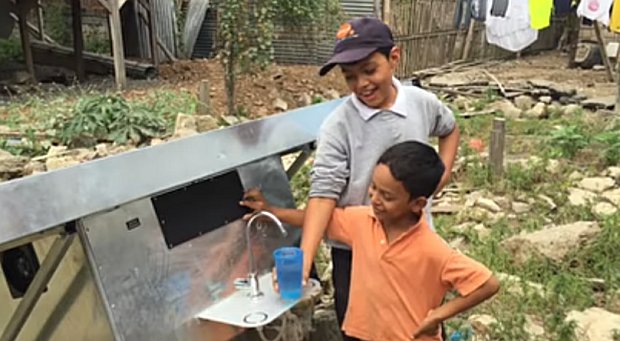 According to the Clinton Foundation, Zero Mass Water will deploy to up to 100,000 Source units by December next year.

“Achieving this level of deployment will impact the lives of as many as 200,000 people. These scaled deployments will produce over 90 million liters of drinking water per year,” states the project overview.

What doesn’t seem to be in short supply around the world is contaminated or salt water. Some of smaller solutions we’ve mentioned in the past that can utilise these sources and solar energy to create clean, safe drinking water include the Australian-designed Carocell, the Desolenator and the much simpler Solvatten and WADI.

Researchers at Carnegie Mellon University also suggest placing a rod composed of tin oxide or titanium dioxide into a bucket of water would decontaminate water.

In August, researchers unveiled a tiny solar device that can disinfect contaminated water in minutes.

With so many solar powered water decontamination options now available or on the brink of being so; there will be soon no technological reason anyone on the planet should be drinking filthy water. The challenge now is to get these products to the people who need them.