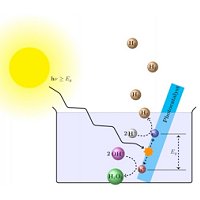 A team from Carnegie Mellon University have proposed an interesting and very simple conceptual device for solar-assisted water sanitation.

Assistant Professor of Mechanical Engineering Venkat Viswanathan and fellow researchers believe simply placing a rod composed of tin oxide or titanium dioxide into a bucket of water that is then exposed to the sun may do the job.

Tin oxide and titanium dioxide are very stable compounds – hardly any chemicals stick to them. In a bucket of water placed in the sun, the materials oxidize water molecules to hydrogen peroxide (H2O2).

In a water purification scenario, one of hydrogen peroxide’s advantages is once it has destroyed all of the water’s bacteria and organic pollutants, the process shuts down on its own. Removal of the rod and then keeping the bucket of water in the sun for a little while longer sees the hydrogen peroxide decomposing to water and oxygen again. The water would be then ready to drink.

“What we are doing, essentially, is using the energy of the sun to excite or oxidize water into a compound that has the potency to clean,” says Professor Viswanathan.

“What I hope this device will do is to give us a decentralized water treatment solution. This device, if it works the way we imagine it, will really enable access to clean drinking water for the billion people that don’t currently have access to it.”

Such a simple gadget could also be very useful to campers and being so compact, could be included in household emergency preparedness kits.

Full details of the proposed device have been published in The Journal of Physical Chemistry Letters in an article titled “Selective electrochemical generation of hydrogen peroxide from water oxidation.”

Another simple and reasonably compact solar powered water purification device we recently covered, one that is currently available, is the Solvattten.