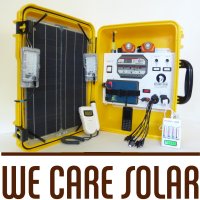 The organisation behind the Solar Suitcase has received a USD $1 million grant to support its efforts in providing portable power sources to medical facilities in developing nations.

WE  CARE Solar is the recipient of the first United Nations Department of Economic and Social Affairs (UN-DESA) Energy Grant; part of the UN’s Powering the Future We Want program.

We first covered the Solar Suitcase in 2011. The suitcase is kitted out with high-efficiency LED medical task lighting, a universal cell phone charger, a charger for small batteries, plus outlets for 12V DC devices. The basic Solar Suitcase is provided with 40 or 80 watts of solar panels and a 14 amp-hour sealed lead-acid battery. A maternity version of the Solar Suitcase also incorporates a fetal doppler.

The system allows for expansion; accommodating up to 200 watts of solar panels and a 100 amp-hour battery.

A new version of the standard Solar Suitcase is currently being developed with a higher capacity battery, more robust lights and a new user interface that alerts health workers to problems.

The organisation’s co-founder, Dr. Laura Stachel, started the initiative after witnessing deplorable conditions in state facilities in Northern Nigeria; where at times procedures such as emergency caesarean sections were being carried out by torchlight and treatment of critically ill patients was delayed due to electricity outages.

Globally, as many as 300,000 health centers lack reliable power and more than 280,000 women die from pregnancy and childbirth complications each year; with most of these deaths occurring in Africa and Asia.

“The United Nations is shining a light on an area that has all too often been overlooked — the lack of reliable electricity in health facilities,” said Dr. Stachel. “I have had the privilege of working with hundreds of health workers who have seen the miracle of light and power in saving lives, and we have much more work to do.  This award is the beginning of a brighter future for women and babies everywhere.”