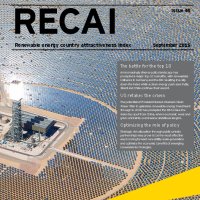 The latest RECAI shows Australia has dropped out of the top 10 and is sitting at 13 due to the Australian government’s “all- out attack” and general negativity towards the Renewable Energy Target.

Australia appears to have gained a bit of an unfortunate reputation due to Federal policy and it remains to be seen if our newly-minted Prime Minister, Malcolm Turnbull can turn that perception around.

The US is back on top of the RECAI leaderboard, regaining its no.1 ranking from China as the most attractive market for renewable energy investment. President Barack Obama’s Clean Power Plan (CPP) has been credited with the boost.

“The CPP is the most comprehensive, far-reaching and flexible emissions legislation in the US to date and gives a clear steer on the country’s long-term energy strategy,” said Ben Warren, RECAI Chief Editor.

“Targets alone will not construct new projects, but long-term visibility increases investor confidence that demand is there, and maintains momentum as we hurtle towards universal grid parity for renewables.”

The UK has dropped out of top 10 for the first time in RECAI’s  history, as a result of  “a barrage of severe and, in some cases, totally unexpected policy revisions”. EY says the UK renewables sector is “plagued by uncertainty and policy U-turns”. The Australian renewables sector could well empathise given its recent experience.

Among the other movers-and-shakers, India grabbed the third position from Germany as a result of various reforms and an influx of foreign investment.

Chile also moved up the index into ninth position, following the success renewables experienced in the country’s energy auctions and a number of large-scale project approvals. Brazil moved up one position to number eight, due to long-term investment and deployment opportunities. EY notes the country is already delivering some of the world’s cheapest wind power.