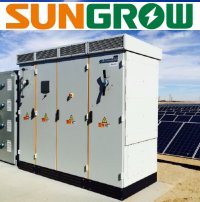 Situated on the outskirts of Lancaster, the 28.4MW TA Acacia Solar Farm consists of 94,340 solar panels. These modules transmit the energy they harvest from the sun to 25 Sungrow SG800MX central inverters that transform the electricity to AC current; suitable for export to the grid.

Sungrow says the project will generate enough electricity to power more than 6,100 homes and avoid a total of 31,500 tons of carbon dioxide annually.

“The 28.4MWdc TA Acacia project is a milestone for Sungrow in the US and we are pleased to be part of it,” said Renxian Cao, chairman of Sungrow Power Supply, Co, Ltd.

Sungrow recently set up a new US headquarter in Fremont,  in the San Francisco Bay Area – and probably just in the nick of time too. The company reported in October its US business had jumped by several hundred percent in 2014. It was only in June last year the company secured its first utility scale solar inverter order in the USA, for the 6MW Ravenbrook Landfill Solar Project

It’s not just in the USA where Sungrow has made waves. The company has quickly grown into a force to be reckoned with globally.

In 2011, it stormed inverter manufacturer top ten rankings by jumping 12 positions to reach number 5. Last year the company was ranked the number 3 supplier of solar inverters in terms of global shipments.  This year, Sungrow is the second-largest inverter manufacturer in the world. The company says it now has over 8,000MW of inverters installed globally in over 50 countries.

The company has also made significant headway in Australia, with Sungrow inverters increasingly being used in home solar power installations; chosen for their high end features but lower price tag than similar competing products.