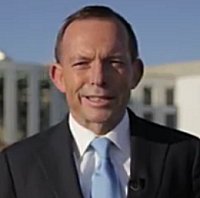 While perhaps he may really want a lump of coal, we just can’t wait to see the excited look on Prime Minister Tony Abbott’s face when he unwraps this Christmas present.

“The panels will be delivered to the current occupant, Prime Minister Abbott, on behalf of the nation by a diverse bunch of local church leaders as a gift to symbolise public support for a clean energy future,” says the group.

Within just a few days of launching the initiative, enough money was raised for a 12 panel system; helped along by the Australian Solar Council.

“As we all know solar panels need to be professionally installed. Therefore the Solar Council is adding to this gift. We will install Mr Abbott’s new solar panels for free,” said the Council’s CEO, John Grimes

“Taxpayers will love the power bill savings at Kirribilli House.”

The campaign was initiated to draw attention to the fact the Australian Government has been attempting to gut the nation’s Renewable Energy Target (RET). The uncertainty of the future of the RET has resulted in a massive 70% drop in investment in Australian large scale renewables this year. This is occurring despite a recent report indicating 89% of Australians surveyed support the RET remaining unchanged or boosted.

According to recent data from the Australian Bureau of Statistics (ABS), one in five Australian households use solar energy. More than 4GW of solar photovoltaic (PV) capacity in installed in Australia; with most of that being small scale  solar power systems.

And what if the gift of a solar panel installation is rejected?

“If the PM and the independent Trust that looks after Kirribilli House do not accept our Christmas gift, we will offer the solar panels to the Davidson Brigade of the Rural Fire Service, where Mr Abbott has served for many years,” says Common Grace.

Apparently, Prime Minister Abbott will not be permitted to regift the panels to Treasurer Joe Hockey; who may prefer solar panels over having a wind turbine in his front yard.

Common Grace brings together church leaders, Christian justice leaders and young change-makers to champion the needs of the poor and oppressed in Australia. Its initial board includes Rev Tim Costello, the CEO of World Vision and brother of Peter Costello, who served as Treasurer in the Howard Government from 1996 to 2007.