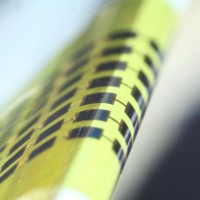 This development makes the previous ultra-thin solar cell we reported on look a little bloated.

In March, we wrote about a solar cell developed by MIT researchers that was just 2.3 microns thick and light enough to sit on a soap bubble.

This new solar cell is around 1 micron thick – approximate 1/100th of the thickness of a human hair.

Developed by researchers at the Gwangju Institute of Science and Technology in South Korea; the device can fully wrap around objects with a radius of 1.4mm.

The ultra-thin solar cells are made from gallium arsenide. The cells are stamped on flexible substrate, without adhesive, then “cold welded” to the substrate’s electrode under pressure at a temperature of 170 degrees Celsius. This melts a top layer of temporary adhesive material called photoresist. The photoresist is then peeled off, leaving the direct metal to metal bond.

The bottom electrode also serves as a back reflector, which shepherds stray photons back to the solar cells.

The extreme bending of the GaAs photovoltaic device can occur without negatively impacting electrical performance capabilities. Maximum strain in the ultra-thin vertical solar microcells is four times lower than that in thicker lateral solar microcells.

According to Jongho Lee, an engineer at the Institute, the super-thin cells can be applied to frames for glasses and fabric.

A paper on the device “Ultra-thin Flexible GaAs Photovoltaics in Vertical Forms Printed on Metal Surfaces without Interlayer Adhesives,” has been published in the journal Applied Physics Letters.

“These ultra-thin solar microcells should be useful for wearable electronics, space applications, and concentrator photovoltaics owing to their extreme flexibility and light weight and also because they offer direct contact with metals,” state the authors.

In other recent solar news from Gwangju Institute of Science and Technology, a research team has identified a cause of the short lifespan problem for perovskite solar cells. The researchers state a factor is halide negative ions that are created during the formation of the perovskite layers.

“This discovery will be a major turning point (in) their successful commercialization,” said Professor Kwanghee Lee.