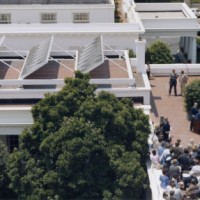 On June 20, 1979, then-US President Jimmy Carter gave a stirring speech on the potential of solar power.

The speech was part of a dedication ceremony held on the West Terrace at the White House for a solar hot water system freshly installed on the iconic building.

“There is no longer any question that solar energy is both feasible and also cost-effective. In those homes now using electricity, a typical solar hot water heating system, such as the one behind me, can pay for itself in 7 to 10 years,” President Carter said during the event.

The system was installed as a reaction to the oil shock of 1978/79; which occurred in the United States due to decreased oil output in after the Iranian Revolution.

President Carter didn’t see the solar panels as a novelty or a band-aid, but as an important part of the USA’s energy future.

“Solar energy will not pollute our air or water. We will not run short of it. No one can ever embargo the Sun or interrupt its delivery to us. But we must work together to turn our vision and our dream into a solar reality.”

President Carter said the system would still be supplying cheap, efficient energy in the year 2000. 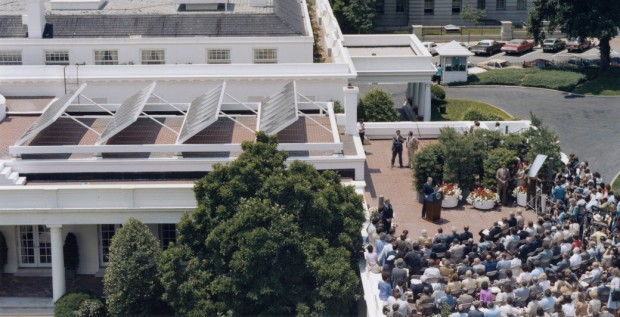 “A generation from now, this solar heater can either be a curiosity, a museum piece, an example of a road not taken, or it can be just a small part of one of the greatest and most exciting adventures ever undertaken by the American people: harnessing the power of the Sun to enrich our lives as we move away from our crippling dependence on foreign oil,” said the President.

As it turned out, it’s been a bit of all of the above. The solar revolution wouldn’t really kick off until decades later.

While nobody embargoed the sun, President Ronald Reagan ordered the system taken down in 1986. The Reagan administration believed that the panels “didn’t befit a superpower”.

However, those collectors were reinstalled elsewhere and still working away at Unity College in Unity, Maine up until at least 2010. One of the panels also wound up on a road trip organised by activists at the College and Bill McKibbon, founder of climate change awareness website 350.org.

After President Reagan had the panels removed, it wouldn’t be until 17 years later that the White House grounds saw solar again. That arrived the form of two solar hot water systems and a 9 kW solar panel system – with the latter installed on a maintenance building.

In October 2010, President Barack Obama gave the nod for solar panels to be installed on the White House main building. The solar power system was finally installed in 2014.

The full text of President Carter’s 1979 dedication speech can be viewed here – it’s quite an interesting read.