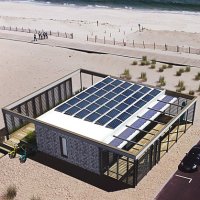 A team from Stevens Institute of Technology in New Jersey, United States is celebrating the completed construction of the solar powered Sure House; which has been built for robustness as well as maximum energy efficiency.

Sure House ( SUstainable and REsilient) is fully solar powered and uses 90% less energy than the average home. Additionally, in the aftermath of a storm or other scenario that causes mains power to be cut in an area, it can become a hub for emergency power in a neighborhood.

The structure uses building-integrated photovoltaics (BIPV), eliminating the need for a racking system. Flexible, thin film solar cells have been used that while resistant to storm debris, can be further protected by the house’s flood-resistant storm shutters.

Instead of a standard solar hot water setup, a hybridised photovoltaic electric system and an integrated heat pump have been utilised. Even when just using the heat pump, the  system will still use 70% less energy than a standard electric hot water heater.

When connected to the mains grid, the house’s solar panels can generate around 10kW in ideal conditions. In the event of a blackout or another disconnection incident, the transformerless inverter switches over to providing 3kW of emergency power; entirely isolated from the grid. 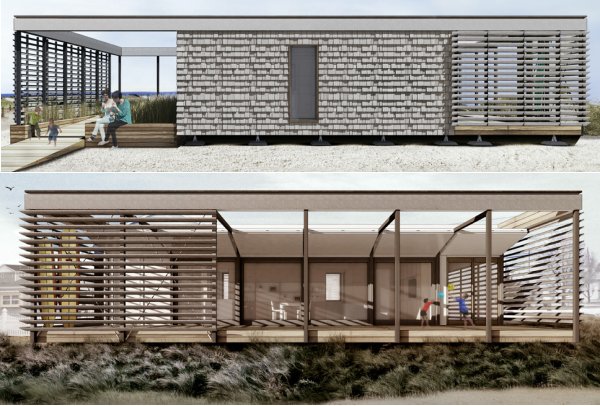 “We need every home in the United States to be built with this kind of technology,” said Hoboken Mayor Dawn Zimmer at a ribbon-cutting ceremony.

Sure House will now be deconstructed and shipped to Irvine, California where it will be reconstructed for the U.S. Department of Energy (DOE) Solar Decathlon; to be run from October 8-18, 2015. The overall winner of the competition is chosen based on affordability, consumer appeal, design excellence, optimal energy production and maximum efficiency.

After the competition, Sure House will be deconstructed again and reconstructed in New Jersey. Following some design adjustments, it will then start its final job as an emergency management and coastal resiliency center along the Jersey Shore.