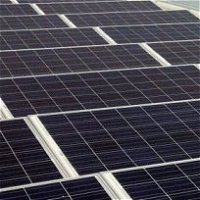 The figures reveal that from April to September 2016 – the UK’s sunniest months – Britain’s solar panels generated an estimated 6,964 gigawatt hours (GWh) of electricity, compared to 6,342 GWh generated by coal.

Solar output over the period was equivalent to 5.2 percent of the UK’s overall electricity demand; nearly 10 percent higher than that of coal, which totalled 4.7 percent of demand.

Solar busted several UK records over the previous two quarters (Q2-Q3). Saturday 9th April was the first day solar panels produced more energy than coal, and May 2016 was the first- ever month. The three months from June through September saw solar beat coal for the first- ever quarter year.

From July 1st, aided by favourable conditions over the English summer, there were 10 straight weeks where solar power generation outstripped coal-fired generation. 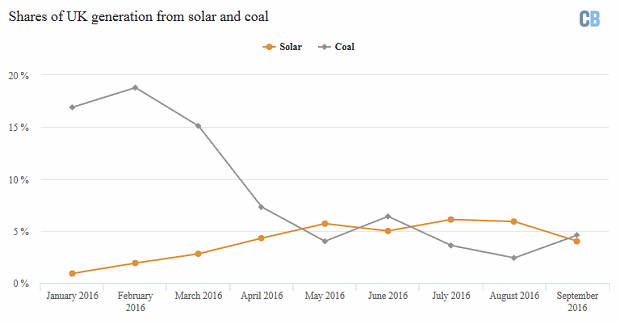 The UK’s installed solar capacity has now reached 12 gigawatts, rising from a base of around six gigawatts at the start of 2015, according to research from Solar Intelligence. This increased capacity has resulted in a jump in generation of 26 percent compared to the same period last year.

By contrast, coal-fired generation has plunged to new lows, due largely to market price shifts favouring gas-fired generators. Current output is down 65 percent compared to the same time last year, with quarterly production even shakier – it was down 76% in Q2 and 82% in Q3 compared to a year earlier.

Worse still for the industry, April 9 2016 was the first time since 1882 that coal-fired generation fell to zero in the UK. Since then, there have been 199 hours when coal was not generating electricity for UK households. Three coal-fired power stations also closed down during the British spring. In Scotland, coal-fired power generation ceased totally in March this year.

“These firsts reflect the changing face of UK electricity supplies, with solar capacity having nearly doubled during 2015,” the Carbon Brief report states. “They also reflect historic lows for coal-fired generation, driven by changes in wholesale energy markets and the carbon price floor {a price which doubled in April 2015}.”

But while the analysis may be cause for celebration in many circles, it should be noted new solar power capacity in the UK has begun to fall in 2016 as the UK government winds back subsidies for renewable energy projects. The situation has weighed heavily on the UK’s solar sector.