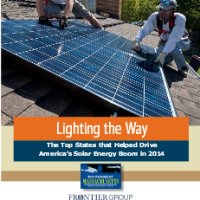 The USA’s Top 10 solar states are not those blessed with the most sunlight according to a new report, but those that have adopted strong support policies to encourage home owners to install solar power systems.

In 2014, one third of all new installed electricity capacity in the U.S. came from solar power. Three states; Hawaii, California and Arizona, generate over five per cent of total electricity consumption from solar.

The report finds the vast majority of America’s solar capacity is coming from a small group of states that have welcomed the solar industry into their communities by instituting strong net metering policies, ambitious renewable energy targets and progressive solar purchasing schemes.

These states have supported a  USD $18 billion solar jobs bonanza, with employment in the industry growing 20 times faster than overall national economy in 2014. Solar energy last year offset 27.5 million tons of carbon emissions, the equivalent of taking 6 million cars off the road for a year.

“The states reaping the largest benefits from the growth of solar energy are not necessarily those with the most sunshine,” the report states. “Rather, they are the states that have laid the policy groundwork to encourage solar energy adoption.”

Most of the Top 10 states have strong net metering policies that pay owners of rooftop solar power systems full retail rates for excess electricity they export back to the grid. Every state in the Top 10 has a renewable electricity standard (RES) requiring utilities to source a minimum amount of energy from renewable sources, and eight have designated “carve outs” – a specific targeting of solar or other clean distributed energy source such as wind.

Arizona, on the other hand, fell from number one in 2013 to number eight in 2014 for installations of new solar capacity per capita after fees imposed on solar customers saw a fall in demand for solar energy.

“By following the lead of these states, the United States can work toward getting at least 10 percent of our energy from the sun by 2030, resulting in cleaner air, more local jobs and reduced emissions of pollutants that cause global warming,” the report (PDF) concludes.