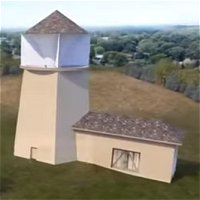 SheerWind announced yesterday it had signed a licensing agreement to enable its novel Invelox wind power technology to be marketed and deployed in the Netherlands.

The creators of the Invelox wind power system claim it has a cut-in wind speed of just over 3 kilometres an hour and under the right conditions, can generate electricity just a few cents per kilowatt hour at utility scale.

Invelox uses a large omnidirectional intake to capture wind, which is then funneled down tapered pipes leading to a concentrator ending in a Venturi section; where the dynamic pressure is high and the static pressure low. Turbines within this section generate electricity. Wind exits from a diffuser, which slows the wind speed down.

SheerWind says the design of the Invelox system enables it to be constructed in built up areas. The system is wildlife-friendly, produces minimal noise or vibration and has 50% less operating and maintenance costs than traditional wind power. Invelox can be constructed at a CAPEX of USD 75¢ per watt at utility scale, with an OPEX of $3 per MWh.

The Invelox concept has been around for quite a while and not everyone has been convinced it’s a goer.

“Turbines of this type have been tested extensively in the past and have never overcome the inefficiencies introduced by vortices created by the funnels, despite hypothetical improvements which ignore real world fluid dynamics,” said Mike Barnard in 2013. Mr. Barnard was previously a Senior Fellow – Wind, at the Energy and Policy Institute.

SheerWind doesn’t appear to be fazed by the criticism.

“SheerWind’s Invelox technology has skeptics as any new industry changing technology does. We believe that is how good technology gets even better.”

It certainly has its supporters. The company said it had customers with total projects of 14 MW, ranging from 200kW to 5MW capacity by February last year; plus its own demonstration units.

SheerWind announced yesterday it had signed a licensing agreement with the Netherland’s Reikon Beheer; its second agreement in Europe to be inked and fifth globally.

Reikon Beheer says it expects its first pilot project to be under construction in the first quarter of 2016.