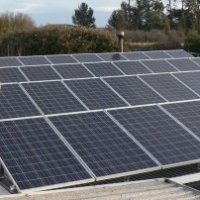 It’s been reported Western Australia’s largest power station is represented by the many thousands of households and businesses with solar panels installed.

In a great example of power to, by and for the people; research from Curtin University indicates 500 MW of installed solar capacity in Western Australia’s South West Interconnected System (SWIS), which incorporates Perth.

Approximately 1,750 residential solar energy systems were installed each month on the SWIS last year. Curtin University sustainability professor Peter Newman says solar installations could grow from 20 per cent of homes across the south west grid currently to half  of households by 2020.

It seems WA’s utilities didn’t see the solar electricity revolution coming until it was too late.

“They didn’t predict it, they have all these contracts for coal and gas that go 20 or 30 years and they have even got an old power station out of mothballs, fixed it up, but never turned it on,” said Professor Newman.

With next-generation home battery storage systems such as Tesla Powerwall now available for pre-order and Enphase Energy’s AC Battery on the horizon; solar may become an even more compelling purchase for WA households seeking to cut electricity costs and reduce reliance on the mains grid.

According to Energy Matters, a good quality 5.3kW solar power system with battery storage installed in Perth can provide a financial benefit of $1,863 – $2,279 a year; depending on system installation location and self-consumption level.

Since December 1, battery storage systems  in Western Australia have been permitted to export support surplus electricity to the mains grid.