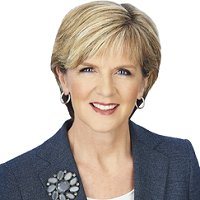 Speaking on transitioning to a low carbon economy at an Indonesian event coinciding with the COP21 climate conference in Paris, Minister Bishop may have given the fossil fuel industry a bit of Christmas cheer.

According to an ABC report, the Minister indicated as-yet-undiscovered or undeveloped technologies and innovation will drive much of the change underpinning transition to a low-carbon economy.

“That means coal-fired power generation is here to stay,” said the Minister.

Perhaps the Minister hasn’t been informed that climate change, spurred on by emissions from burning fossil fuels, is already threatening the Earth’s ability to produce food – and the impacts are expected to worsen. An Oxfam report from earlier this year states there could be 25 million more malnourished children under the age of 5 by 2050 as a result of climate change.

As for prosperity, the same report says economic losses attributable to climate change in the Pacific region could be as high as 12.7% of GDP by 2100.

Andrew Stock, Director of the Clean Energy Finance Corporation and part of the Climate Council team, may also disagree with the Minister’s views.

In a post on Monday, Mr. Stock sounded a warning about kicking the climate change can down the road when all the tools needed to solve the crisis were already at hand; tools such as renewables including wind energy and solar power.

“In fact, waiting for further innovation could be exceptionally dangerous. The carbon budget – the very limited amount of fossil fuels that global society can burn and still meet the 2 degree policy target – is rapidly being consumed. There is a strong sense of urgency to get on with the job now.”

“Innovation is going to accelerate the use of these technologies. But we have the tools we need now, and they’ll only get better as we roll them out. There is absolutely no excuse for delay.”