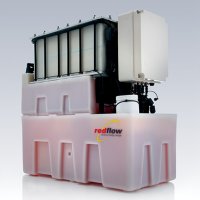 A battery system from Australian company Redflow is to be integrated with an Ergon Energy community scale solar power project in Queensland.

“The system will comprise 48 Redflow ZBM flow batteries in a containerised large scale battery solution (LSB) producing 100kW and 480kWh of energy matched to an ABB PCS100 inverter,” says part of a statement from Redflow.

” The complete system has already been built and tested by Redflow and delivery to Ergon is expected within the next few weeks.”

Flow batteries consist of liquid solutions contained in two separate tanks that form the positive and negative side of the battery. Pumping the solutions in one direction charges the battery and the other direction discharges it.

Redflow says its batteries feature a high temperature tolerance of up to 50°C and no active cooling or fire suppression is required. The ZBM can be discharged to 100% without causing damage to the battery.

The smallest flow battery in the world, the ZBM is made from totally recyclable plastic with no rare earth materials used in the solution (zinc bromide).

Designed primarily for commercial, micro-grid, off-grid and utility applications, the company is also working on the development of a “plug and play” type residential battery storage system.

Redflow’s home battery system will go head-to-head with other next generation batteries soon to hit our shores from leading companies including Tesla (Powerwall) and Enphase Energy (AC Battery).

Energy storage companies have a huge potential residential market in Australia given the high cost of electricity here and the level of uptake of solar panels. Of the households that have installed or are considering installing solar power systems, 81% are also contemplating home energy storage according to a recent report from Energy Consumers Australia.

Half of all households in Australia are predicted to eventually install solar + battery systems.