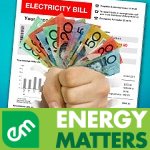 National solar provider Energy Matters has launched a competition that will see the winner have their power bills paid for a year.

With electricity costs continuing to spin out of control; the arrival of a power bill is often accompanied by a deepening sense of anger and despair in many households.

Regardless of who or what the primary villain is, that knowledge on its own won’t help households pay a single cent of their inflated power bills. With no end to escalating prices in sight; energy efficiency is becoming an increasingly important strategy in reducing electricity bill shock, as is going solar.

To help further raise awareness of the huge savings that can be made by installing solar power systems; Energy Matters has launched a competition involving entrants submitting for an instant and obligation-free online solar quote and then on a form on the quote results page, stating in 25 words or less how they would spend the savings if they switched to solar.

Many Australians may not realise how beneficial solar panels can be in slashing their power bill and that even a small array can realise substantial financial benefits. For example, a 2kW expandable solar power system Energy Matters currently has on special can generate savings of up to $980 annually; depending on installation location and electricity consumption profile.

Households keen to slash their electricity costs by installing solar panels but not wanting to pay for the full cost of a system up front can take advantage of Energy Matters’ payment plan option.