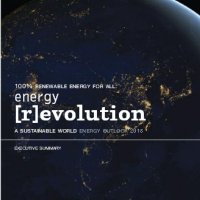 100% renewable energy for all is achievable by 2050, says the latest Energy [R]evolution 2015 outlook report – and that’s everything; electricity generation, transport, heating. The whole kit and caboodle.

Now in its tenth year, the latest Energy [R]evolution report from Greenpeace states while switching to 100% renewables by 2050 will be expensive –  about US $1 trillion a year – the fuel savings alone are valued at US $1.07 trillion a year.

The report recommends a timeline for the phasing out of fossil fuels; with  lignite (brown coal) gone by 2035, followed by coal in 2045, then oil and gas by 2050.

Renewables based electricity generation is a no-brainer – wind, solar, wave, hydro and geothermal.

Heating oil could  be replaced by solar collectors, geothermal and heat from renewables-generated hydrogen. Gas could be replaced by hydrogen. Cars would be EV’s and planes and ships could be powered using biofuels, hydrogen and synthetic fuels produced using electricity.

A clean energy revolution of this scale will also power millions of green collar jobs. Globally, solar PV will provide 9.7 million jobs by 2030, which is equal to the number of people working in the coal industry today. Jobs in wind power will grow to more 7.8 million.

Greenpeace says this is no pipe dream and evidence of the potential is already being witnessed. Even though the global subsidy system currently favours fossil fuels; renewables are pushing ahead. Last year, renewables represented 60% of new power generation worldwide. Within the next 15 years, renewables’ share of electricity generation mix could treble from 21% today to 64%,

“There are no major economic or technical barriers to moving towards 100% renewable energy by 2050,” says the report. ” It just requires the political will to make the change.”

Greenpeace says a starting point for this 100% renewables scenario is to agree on further binding emissions reductions at the upcoming Paris conference under the UNFCCC process.

“The report shows we could transform our energy supply, switching to renewables, which would mean a stabilization of global CO2 emissions by 2020, and bringing down emissions towards near zero emissions in 2050.”

The full Energy [R]evolution 2015 report can be viewed here (PDF).