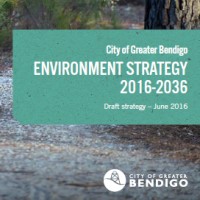 The city of Bendigo in Victoria is considering a goal of 100% renewable energy by 2036 – and rooftop solar could play a significant role in achieving that goal.

Residents of Bendigo have been asked to provide feedback on the draft City of Greater Bendigo Environment Strategy 2016-2036, which aims for zero net carbon in 20 years.

The draft strategy was developed over the past year, based in part on extensive community consultation.

“The people we consulted with said in the next 20 years they want a healthy and protected environment, the Bendigo Creek restored to a natural waterway and a healthy urban forest that provides more shade and habitat for nature,” said City of Greater Bendigo Sustainable Environment Manager Robyn Major.

“They also said they want to see more local renewable energy and green jobs and homes and buildings that are more energy efficient.”

According to solar provider Energy Matters, there’s already been significant uptake of solar panels in Bendigo itself. There are approximately 2,310 solar PV installations in Bendigo’s postcode, 3550, and another 20 in the 3552 postcode.

More than 25 megawatts of solar power systems have been installed on over 7,000 homes throughout the Bendigo municipality. 16% of homes in the municipality have installed solar panels, with nearly 1 in 4 homes in postcode 3551 having done so.

Bendigo receives solar irradiation levels of around 4.42 kilowatt hours per square metre daily on average. Northern Victoria receives almost as much sunlight as northern Australia, but with the added advantage of being very close to the transmission grid.

However, Bendigo is still a net energy importer.

“Based on average electricity bills, Bendigo spends at least $80 million powering homes and almost all of that money leaves Bendigo. Most leaves the country,” states the Strategy.

“To achieve zero carbon and stimulate our economy, we need to simultaneously reduce energy demand and then re-invest in the local economy the millions of dollars we pay non-local power companies each year.”

The goal for 2036 would see 100% renewable energy generation from local and regional sources.

“Along with a significant increase in energy efficiency, we can show the rest of Australia how a municipality with more than 100,000 people can be powered by renewable energy.”