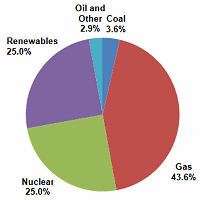 The share of low carbon electricity generation in the UK’s energy mix rose to a record high of 50% in the third quarter of this year; up from 43.5 per cent in Q3, 2015.

Nuclear generation accounted for 25 per cent in Q3 and the share from renewables such as wind and solar power increased by 1.3% to 25 per cent.

Electricity output from wind, solar and natural flow hydro was 16.4 per cent higher than the same period in 2015, which the government partly attributes to improved weather conditions for renewable generation – being higher wind speeds, more sun hours and increased rainfall levels.

Generation from solar panels increased by a very impressive 30 per cent compared to 2015 Q3, jumping from 2.7 TWh to 3.5 TWh – largely as a result of increased capacity. 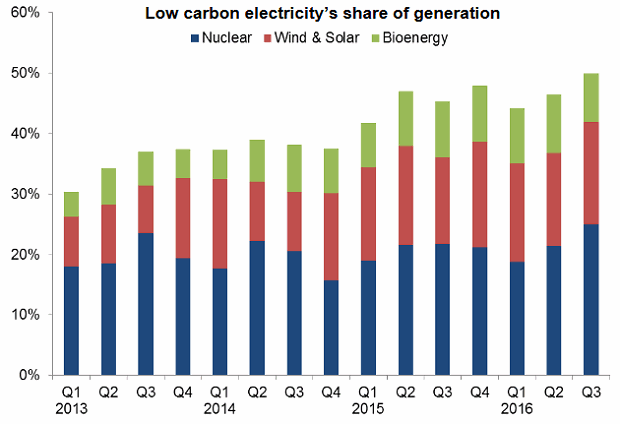 Generation from onshore wind rose by 19.4 per cent and offshore 3.8 per cent thanks to higher wind speeds compared to last year and also increased onshore wind capacity.

Installed renewable electricity capacity hit 33.4 GW at the end of the third quarter of 2016, a boost of 11.3 per cent (3.4 GW) on last year. Solar power accounted for the lion’s share of increase ( 2.5 GW), mainly due to large-scale solar installed during the first quarter of this year.

As for fossil fuels, gas made up 43.6 per cent electricity generation during the third quarter and coal continued its plummet – down to 3.6%. This was as a result of technology switches and closures of coal-fired facilities, including the remaining generation units at Longannet Power Station in Scotland. That closure also signified the end of coal power in Scotland.

The Department for Business, Energy and Industrial Strategy states between Q3 2015 and Q3 2016, coal and other solid fuel consumption in the UK fell by 59 per cent; driven by decreased coal use in electricity generation.

In another recent related report from the Department, it notes the UK had 898,029 solar panel installations up until the end of November (preliminary figure); with a combined capacity of 11,429 MW. In January 2010, there were just 5,737 grid-connect systems installed in the UK.