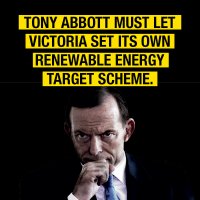 Victoria’s Andrews Labor Government has called on the Federal Government to remove legislation that prevents State Governments from having their own Renewable Energy Target (RET) type schemes.

A petition from Labor concerning the action states if Section 7c is removed it will reinstate the Victorian Renewable Energy Target (VRET) scheme to top up the national RET; which looks like will be slashed to 33,000 gigawatt hours by 2020.

Victoria originally agreed to remove its renewables target in 2009; however, that was part of a deal for a 41,000GWh national target. Victoria’s government states scaling back the RET will reduce the number of major renewable energy projects constructed in the state, costing it jobs and growth – particularly in the ailing automotive industry, which is looking at renewables as a lifeline.

“The Federal Government must move out of Victoria’s way and change the law. Our state needs a proper renewable energy target, to support the industry and reduce pollution,” said  Victoria’s Minister for Energy, Lily D’Ambrosio

“Victoria will lead the way on renewable energy, which creates jobs, drives growth and protects our lifestyle and environment.”

Renewable energy in Victoria suffered at the hands of the previous coal-friendly government. According to an ABC report, the state had missed out on $4 billion in investment and 3,000 jobs under the Coalition government.

During that period, renewable energy and investment was actively discouraged. A report from the Climate Council at that time stated: “Victoria now has the worst policy environment for renewables in the country. Victoria has no targets or policies to attract renewable energy.”

However, the situation in the state since then has begun changing rapidly with a change in government.

In March, the Andrews Labor Government made a commitment to reform wind farm planning laws and open up the state to renewables. A $20 million New Energy Jobs Fund will also offer support to community groups and businesses developing renewable energy projects.

“We’ve restarted the wind farm industry and we’re committed to once again being a leader on tackling climate change,” said the state’s Minister for Climate Change, Lisa Neville. “We’re making sure Victoria has a plan to preserve our environment.”

“It’s encouraging to see states such as Victoria investigating ways that can further accelerate renewable energy and take advantage of the opportunities that come with that,” said Clean Energy Council Chief Executive Kane Thornton. “There is a lot that can be done at the state level and the CEC has put forward a range of ideas and solutions for state governments.”