The Australian Energy Market Commission (AEMC) has given electricity companies the green light to charge rooftop solar owners for exporting power to the grid. The controversial export tariff, or ‘sun tax’ as opponents have hailed it, has caused widespread concern and outrage among many who feel solar owners are being unfairly penalised. 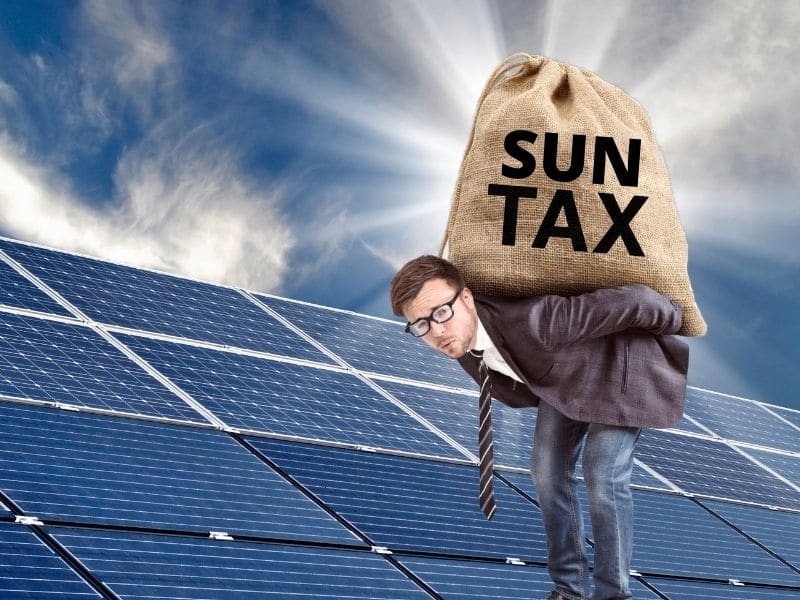 This is entirely understandable. As far as climate and energy policy in Australia goes, rooftop solar has been the shining light of progress and success in an otherwise lacklustre performance overall. Does this ruling spell the end of a golden era? Despite the sensational headlines and commentary, solar owners need not panic. Below we have listed everything you (as a current or potential solar system owner) need to know about the export tariff.

The AEMC has explained that the solar export tariff will work as a “two-way” pricing system to ultimately reduce “traffic jams” on the grid and allow networks to tailor their own pricing mechanisms to ensure investment in parts of the grid where needed.

Export tariffs will only apply to NEM jurisdictions

Solar export tariffs will be gradually introduced in the National Electricity Market (NEM) jurisdictions, which are everywhere except WA and the Northern Territory.

Tariffs are charged only under limited circumstances where there is an over-capacity of generation but high demand for electricity.

It’s optional, but not without potential drawbacks

The AEMC took the recommendations of industry players into account when it created a recent amendment to the rules. The amendment, valid for at least 20 years, states solar owners will be able to choose whether or not they want to have their power exported and charged accordingly. The drawback is that they may instead receive a static export limit, but it is the same as what current customers face now.

AEMC chief executive Benn Barr said that power providers will be able to develop a range of packages for consumers to choose from, but they must include a “free basic service”. However, Mr Barr said many people would find they would be financially better off choosing a paid option, because of the likely returns.

“If you don’t want to pay for exports, you don’t have to,” Mr Barr said. “[But] if you can move your power around, you’ll get incentives to do that.”

It won’t be enforceable until 2025

The new rules will take effect on 1 July 2022, but the AEMC has imposed a ban that stops electricity companies from making these charges compulsory before 1 July 2025. As evidenced by always-changing policies, nothing is set in stone. For some states and territories, it may be years before the taxes are imposed. Any packages will have to be negotiated by networks and industry and consumer groups, and then be approved by the Australian Energy Regulator.

It will force distributor networks into upgrading infrastructure

The AEMC says that in response to its draft proposals, it had introduced new requirements on network companies to actively accommodate rooftop solar in future network planning.

Electricity distribution companies have said that the reforms would allow more rooftop solar systems and batteries to connect on to the grid and provide networks with the incentive to invest in “smarter” management systems for the network.

Modelling done by the AEMC found that, in a worst-case scenario, existing solar customers would still be able to earn 90 per cent of their current revenue without making changes to their consumption behaviour.

“Solar remains a really, really good investment for consumers and the modelling in the report really gives evidence to that,” Mr Barr said.

Some solar owners may receive greater returns than they do now

Solar owners will benefit from higher feed-in-tariffs and other incentives to export power at times beneficial to the wider grid. This means that, for some solar owners who have been export limited to zero under the current rules, the imposition of export tariffs might actually prove benficial. Under the new rules, they will be able to connect to the grid, but control when they export via a battery or a variety of export controllers (which should be more available in 2025 and beyond).

The AEMC want to encourage more households to install more battery storage and export less at peak times. The AEMC also said it was looking at the effect of battery storage on grid reliability, because batteries can be used to stabilise frequency and voltage levels in networks.

With this in mind, we can expect to see more rebates and incentives on home battery systems, making them a more viable investment. At the very least, market competition should increase and effectively drive battery prices down by the time the new rules are enforceable. By then, we should also see a rise in the mainstream adoption of Electric Vehicles, making the purchase of a home battery an even smarter investment. As discussed in our recent article on home batteries, adding a battery to a residential solar system can double the amount of self-generated electricity consumption. The savings potential is significant, and more affordable solar batteries will only accelerate adoption.

Solar exports tariffs aren’t ideal and probably aren’t fair to solar owners–particularly considering that energy companies are a MUCH bigger part of the problem. Even so, are these tariffs really as bad as they seem? More likely than not, in the blunt words of Jack Gilding from the Tasmania Renewable Energy Alliance, tariffs are; “…a dumb idea, but probably won’t end up costing too much.”

Worst-case scenario, solar owners will lose 10% of their current revenue. Best-case scenario, it will force distributor networks into upgrading infrastructure to be more solar friendly and make solar batteries more viable for investment—which in turn could mean greater returns for solar owners than what they might get now.

If you want to learn more about how you might benefit from solar and solar batteries, our solar power and battery storage calculator is simple to use! Just enter your postcode and average daily power consumption in kWh. The solar calculator will then generate useful estimated performance information and potential savings. We can then send this information to 3 trusted local installers in your area to receive free, obligation-free quotes.