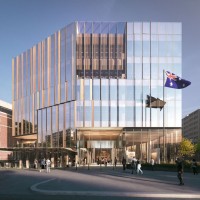 Australian company Bates Smart has been selected to design the new Embassy; which will replace the existing building constructed in the mid-1960s. The decision to rebuild was based on the cost of renovating the existing structure; which would have been nearly equivalent to the cost of the new building.

“The new Embassy design will promote an enduring vision of a contemporary and innovative Australia, paying tribute to the Australian landscape,” said Minister Bishop.

Among those solutions will be a ” green roof with solar panels” according to Architecture AU. The capacity of the solar power system to be integrated is unknown; but with a rooftop that size, it could be significant and make a major contribution towards reducing electricity costs associated with running the building. The building will also be clad in a thermally efficient facade. 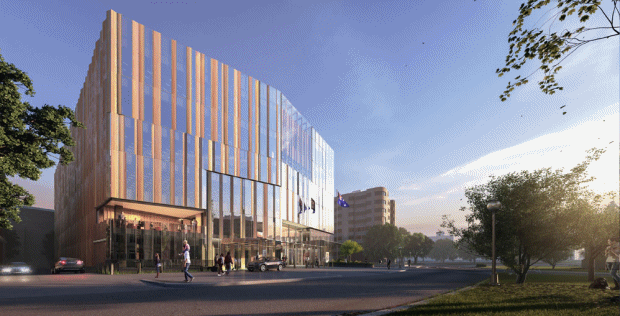 Other features of the new Embassy are a huge glass atrium in the centre of the building, a large open public space that will look back towards the White House, an exhibition gallery and function rooms.

Bates Smart is understandably quite chuffed with being selected as designer for the $237-million project and is promising the new Embassy will attract attention.

“The project has a refined and rich materiality which will make it stand out in Washington,” said Kristen Whittle, director of the company.

The company, which has a 160 year history, has studios in Melbourne and Sydney and  a staff of more than 200.

“We pay special attention to the environmental performance and long term durability of our buildings,” states the Bates Smart web site. ” Where possible, we harness the latest sustainable ideas and technologies in order to deliver the maximum achievable environmentally sound outcomes for our clients.”

The new building won’t be the first Australian Embassy to harness the energy of the sun. In March this year, the country’s new Embassy in Jakarta was opened, which features a number of solar hot water systems.