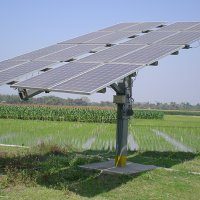 More than 300 solar powered water pumps have been installed in Bangladesh under a World Bank assisted program; with more to come.

Approximately 45 percent of Bangladesh’s work force is employed in agriculture and the contribution of the sector to the nation’s GDP growth was 16.33 percent in the 2013-14 FY.

A massive cost associated with agriculture in Bangladesh is the use of diesel powered irrigation pumps – an estimated  1.34 million of them. Approximately USD $900 million a year is spent on diesel fuel. Aside from the financial impact, there’s also the environmental cost of emissions.

More than a quarter of a million electric pumps are also used in the country’s agricultural sector; but electricity supply is often unreliable.

Each solar pump can provide electricity for 3 crop irrigations for 20 acres of land – which may cover multiple landholders. The pumps are not only cheaper to run and emissions-free, but more reliable and easier to maintain.

300 solar pumps compared to 1.34 million diesel powered units is just a drop in the ocean; and even the target of 1,250 additional pumps by 2018 will hardly put a dent in diesel’s dominance – but it’s a start. As we’ve seen with solar elsewhere, it can have a real domino effect; rapidly moving from fringe to mainstream.

There are many other applications for solar power in the agricultural sectors of developing nations. Recently we reported on solar powered hammer mills starting to be used in Zambia.

In addition to assisting farmers, solar power in Bangladesh has also reached into the homes of millions of its citizens through the provision of micro-systems.