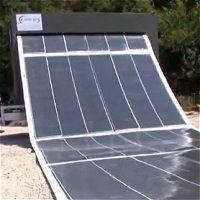 The creator of this roll-deployed solar panel array says it can be manufactured in spools of up to 100kW; and perhaps even more.

Primarily designed for use in off-grid solar power systems, an entire 100kW of solar panels can be rolled out in a matter of minutes using a tow vehicle, and then rolled up again with the aid of a motorised spool.

Renovagen’s RollArray includes embedded power cabling that is pre-wired and pre-connected to the solar modules; with a power-carrying capacity of at least 10kW-20kW per metre width.

The solution incorporates a structurally supporting tension-bearing layer that protects the array structure from wind loading and stresses experienced while deploying.

The company says it is also on the brink of production of a the Multi-Gen On/Off-Grid PV System-in-a-box.

Renovagen says from go to whoa,  the system can be fully deployed to the point of plugging in appliances in less than 5 minutes after arriving at a site.

Also on the drawing board is the RollArray Isogen; housed in a standard-size shipping container. Referred to as a “mini-grid in a metal box“, it incorporates a solar array measuring 5 metres in width and up to 200 metres in length, inverters and a large deep cycle battery bank. Renovagen claims RollArray Isogen will be capable of generating 10 times more power than competitive products.

Renovagen was founded at the end of 2012 and is about to undertake what is increasingly becoming a favoured method for raising cash needed for the further development, production and launching of innovative solar products  – crowdfunding.