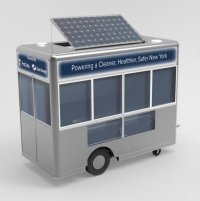 The environmental footprint of New York City’s 8,000 food carts and trucks isn’t inconsequential. According to environmental non-profit group Energy Vision, more than 60% of the carts use gasoline or diesel powered generators.

The new carts  from MOVE Systems each use solar and other technologies to reduce greenhouse gases by 60% and smog-causing NOx pollution by 95% – the equivalent of taking nearly 200 cars off the road.

The MRV100 vending vehicle includes a restaurant-grade kitchen with refrigeration. Each unit is equipped with a battery recharged by a hybrid CNG generator and solar panels on the roof to provide additional charging capabilities.

The MRV100’s generator can run on renewable natural gas (RNG), which is made from food and other organic waste. Use of this fuel could offset up to 4 million gallons (more than 10.5 million litres) of gasoline a year according to Energy Vision.

“We have adapted hybrid car technology to replace generators that are often as loud as chainsaws,” says Move Systems.

“Our solar, natural gas, and battery powered electrical system, engineered specifically for mobile food vending, reduces generator noise by half and decreases climate change emissions by two-thirds. This hybrid system is not only cleaner and quieter, it is also more powerful and reliable.”

While the average cost of a basic MRV100 food cart is anywhere from USD $15,000 to nearly $25,000, MOVE Systems is providing the carts at no cost to the first 500 vendors who sign up to switch to the new model.

“New Yorkers encounter air pollution every day and in some communities like mine, there is an undeniable direct correlation to some of the highest asthma rates in the country. I’m pleased that the carts being provided will reduce emissions, improve air quality and increase safety on our streets,” said Councilman Donovan Richards, who chairs NYC’s Environmental Conservation Committee.